The zoning around the parkland of Grandview Ballpark is primarily light industrial with the nearest residential zone nearly a half-mile away. The current range has also been on this property for 30 years. The new shooting range was built on the same piece of property as the existing shooting range, moved just 200 feet to the north. 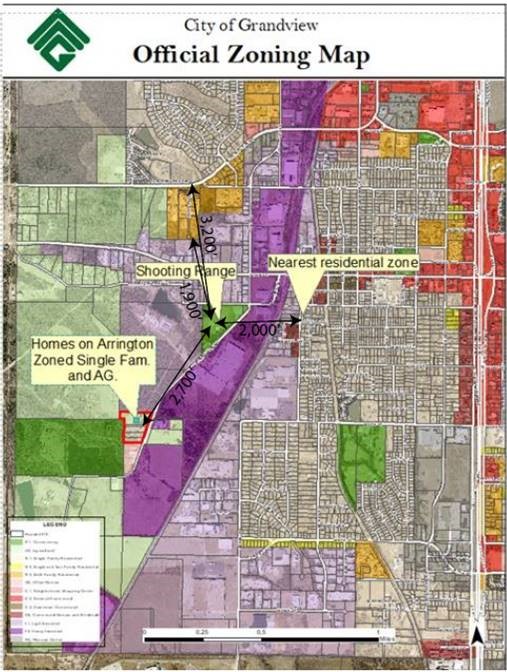 Who approved all of this?

Grandview voters approved the new range and its current location by approving the No-Tax Increase Bond Issue in 2014. City leadership had decided prior to the election to keep the range on the same property to create minimum negative impact to the few residents in the area. That information was shared with the citizens in 2014 prior to the election as you can see from the information materials below. 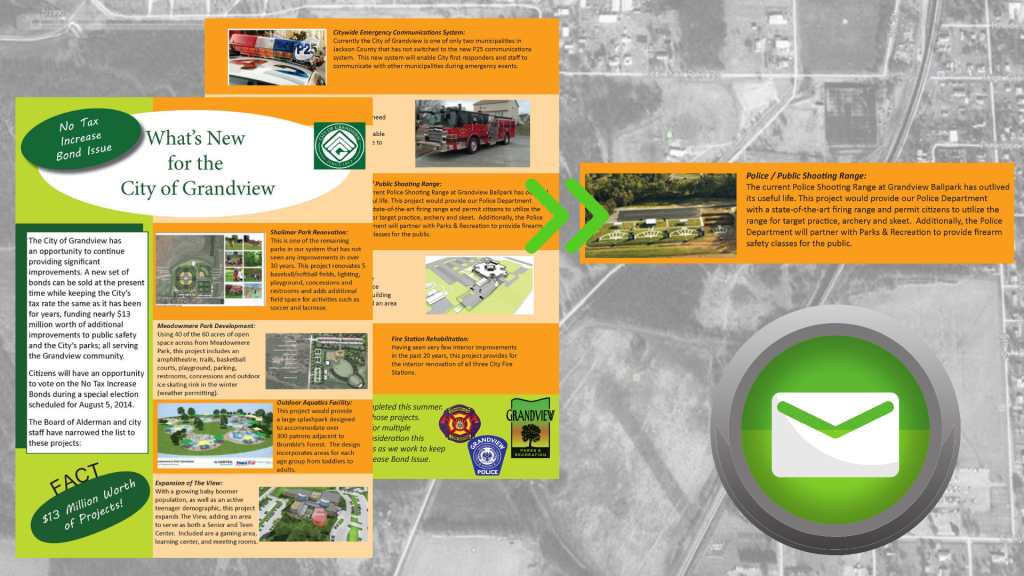 The first conceptual drawings publicly published and mailed to every Grandview address in 2014 showed the new shooting range on the lower ballfield location at Grandview Ballpark. The measure was approved in a public vote. Here is the exact language as it appeared on the August 2014 ballot:

Throughout planning and construction of the new shooting range, Grandview Police Department talked with many residents who live nearby. We took many phone calls, exchanged emails, held multiple meetings, one with the shooting range designer, and even toured the range with neighbors to keep them informed about the process and progress.

What are you going to do about the noise?

We incorporated many noise-mitigating factors into the new shooting range including: 12-inch thick 20-foot concrete walls at the ends of the range, 12-inch thick 10-foot walls along the sides of the range, shredded tires behind targets, choosing the lowest point for construction, and having it surrounded by a wooded area. In addition, the designer of the shooting range had suggested planting evergreens in the area between the nearest residential properties on Robinson Pike Road and the range. Vegetation is one of the best noise absorbers. The City has purchased and sourced $10,000 worth of evergreen vegetation to be planted. The planting process will start next week. However, it appears that may not be enough.

Once Grandview Police Department began training exercises at the new shooting range the week of September 10, we started receiving complaints from around the City. Public Works crews have taken noise measurements from different locations around Grandview. Until noise can be controlled to our satisfaction there will be no shooting after 8:00 p.m., rifle training will be conducted at the old shooting range, and there will be no open range day.

Why are officers shooting at night?

As part of their annual rifle training and certification. It’s a liability for the City of Grandview to not provide officers, primarily those who work at night, the proper training in low-light or night conditions. A 1979 ruling in Indiana decided firearms training for law enforcement had to be more reflective of the conditions officers face while working.

What’s going to happen when it opens the public?

The new range will not open to the public until the spring of 2020. The safety of everyone in the City of Grandview is paramount to City leaders and the shooting range will be a safe, controlled environment. Days and hours of operation for the public will be limited to 2-3 days a week during the day. Sworn Grandview Police Officers will always be present during public shooting hours. They will act as Shooting Range Officers to ensure everyone’s safety. No weapons with calibers equal to or greater than .50 BMG, will be allowed.*

What’s the next step?

Grandview PD Chief Charles Iseman has also contacted the designer of the shooting range and requested a conference call next week to discuss what other immediate measures we can implement quickly without breaking the bank to improve the noise resonating from the shooting range.

What is the City’s goal as far as sound levels at the new shooting range?

The sound study makes five recommendations for lowering sound levels at the shooting range. How much will all of these cost?

The estimated costs of implementing all five recommendations from AVANT Acoustics are $350,000 - $825,000 depending on what products/systems are selected.

Are any of these products or systems guaranteed to work?

One system carries a guarantee. Grandview Police Department is conducting research with other outdoor shooting ranges to identify effective products and systems.

What happens after all the products are installed?

Avant Acoustics engineers will conduct another independent sound study to determine levels at the new shooting range from the same measurement locations as determined in the original sound study.

What happens if the sound levels aren’t reduced to old shooting range levels or better?

Each recommended solution builds upon the other, so it is something the City can keep building on if necessary.

What would it cost to enclose the shooting range?

The cost to fully enclose the range has been estimated between $3-5 million. To put this in perspective, the Police Department’s annual budget runs just less than $6 million.

What would it cost to move the shooting range?

One of the City’s primary duties is responsibility with taxpayer dollars. Voters approved this $1.2 million shooting range and the City carried out its commitment to voters by completing the project. At this time, moving the range isn’t a feasible or financially responsible option.

How will sound levels from the shooting range affect the health of nearby residents and workers?

At the current sound levels, isn’t the City breaking its own noise ordinance?

No. Code Section 15-2 is unclear and contains no standards such as decibel limits. In addition, Code Section 16-4 prohibits businesses and enterprises from producing noise considered harmful or detrimental to “the comfort, peace or health of persons” within 150 feet of any residence. The shooting range is more than 400 feet from the nearest residence. However, in this case, Missouri state law prevails over City Code. Section 537.294 of the Revised Missouri Statutes grants immunity to both public and private owners of shooting ranges from any criminal or civil lawsuits filed as a result of noise or sound. The Missouri Supreme Court upheld this statute in a 2011 case titled Goerlitz v. City of Maryville.

Will there be a follow-up sound study?

Yes. Once applications/products are approved and installation is complete, Avant Acoustics engineers will conduct a follow-up sound study to measure new levels.

Yes. Below is a list of ranges built or modified by TRS in areas with high population density:

How often will police be training at the new shooting range?

The days of range operation will be flexible based on the needs of the Police Department, our federal partners and public demand.  Grandview PD has already agreed to close the range to all shooting on Sundays and can also limit PD training to less than 50 days a year.

Trainings could start as early as 8AM and as late as 10PM.

How often will federal partners be training at the new shooting range?

The contract with Honeywell allows them to train up to 30 times a year.

What are the days and hours of operation for the public?

One weekday TBD and Saturday noon-6PM. After one year, Parks & Recreation will reassess.

How many days a year will the range be used overall?

Public- Up to two days a week

*CORRECTION 12/3/2019: ORIGINAL VERSION HAS BEEN EDITED TO CORRECT MISINFORMATION THAT READ: The caliber of the weapon is also capped at .50 BMG or 50 caliber.