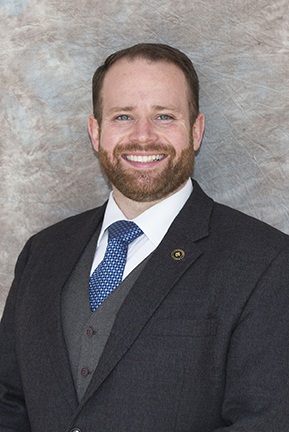 Alderman John Maloney is a lifelong resident of Grandview, Missouri. After graduating from Grandview Senior High in 2004, John went on to earn his Bachelor’s degree in Business Administration from College of the Ozarks: one of five work colleges in the country.

In 2007, while attending College of the Ozarks, John was chosen from thousands of applicants for a United States Department of State internship position in the Foreign and Political Affairs Office at the U.S. Embassy in Berlin, Germany. This experience in Germany gave him the insight to combine his passion for civic duty and government service and run for public office.

In addition to public service, John is also a non-profit professional. His career began in Workforce Development for Catholic Charities of Kansas City-St. Joseph on a Department of Labor Grant. John then joined United Way of Greater Kansas City as a Donor Relations Manager and was responsible for raising $1.2 Million for local agencies. John then served as the Vice President of Operations for People to People International World Headquarters here in Kansas City, Missouri. He is now Interim Director of Grandview Assistance Program.

Alderman Maloney’s family installed the importance of volunteering and serving others and he now dedicates much of his free time to many local non-profits and civic organizations. When John is not working or volunteering, he is an avid outdoorsman who enjoys hunting, fishing, and camping across the state with his family and friends.

In 2017, John married the love of his life, Katherine. Katherine holds a Master in Public Administration and is also a non-profit professional that shares the same love of serving others.